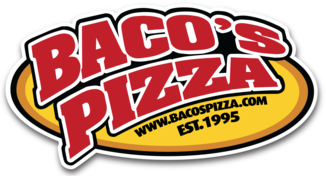 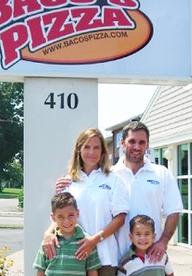 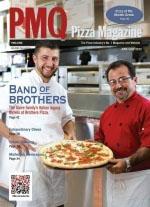 Winner of the Best Pizza Crust in Enfield award from the Enfield Jaycees!

Baco's Pizza opened its doors on March 5, 1995 by Harry and Karen Bacopoulos, with a vision of creating Enfield's best pizza. Harry grew up making pizza with his father, Petros, who owned several pizzerias in the area. Now retired, Petros spends a lot of time helping in the business as well as Harry's brother Tim. Making it a true family business.

Baco's Pizza has two claims to fame. Not only does it enjoy the distinction of having the "Best Pizza Crust in Enfield," according to a poll conducted by the Enfield Jaycees, but it also has appeared in film. The restaurant was the scene for a short screenplay entitled, "30 Minutes or Less," which was written by Chet Fagin and Guy Mellitz and filmed by Concrete Films of New York.

We were featured in PMQ Pizza Magazine June/July 2012 Pizza of the month!

ONLY FOR A LIMITED TIME!

MOVIE WE WERE FEATURED IN BACK IN THE DAY!